Investor Education and Protection Fund (IEPF) is for promotion of investors’ awareness and protection of the interests of investors.  The provisions of sub Section (5) (6) & (7) of section 125 of the Companies Act, 2013 are effective from 13th of January, 2016 vide MCA Notification issued by Central Government.

II. Procedure for transfer of amount to IEPF in case of unpaid/unclaimed dividend: 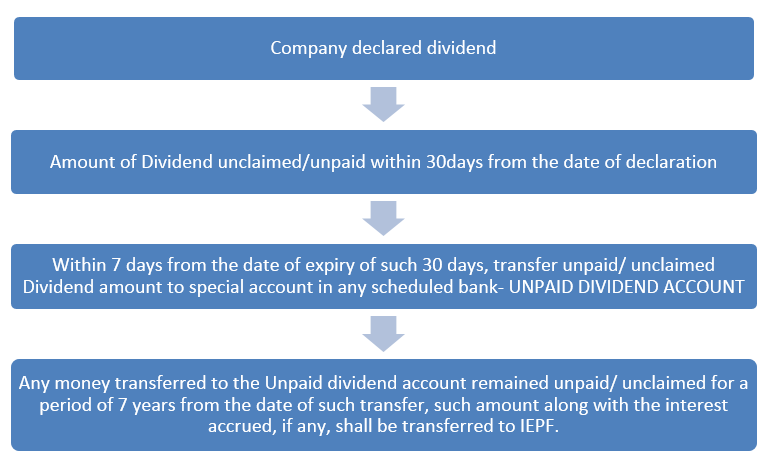 III. Amounts to be credited to IEPF:

The fund can be utilized for:

In exercise of the powers conferred by sub-sections (5), (6) and (7) of section 125 read with section 469 of the Companies Act, 2013
(18 of 2013), the Central Government shall constitute an authority through Investor Education and Protection Fund Authority (Appointment of Chairperson and Members, holding of meetings and provision for offices and officers) Rules, 2016, notified on 13th January, 2016.

VII. Functions of the Authority:

VIII. Auditors of the fund

The accounts of the Fund shall be audited by the Comptroller and Auditor General of India at such intervals as may be specified by him and such audited accounts together with the audit report thereon shall be forwarded annually by the authority to the Central Government.